Home » Sugar Gliders vs Flying Squirrel: What Is The Difference?

Sugar Gliders vs Flying Squirrel: What Is The Difference? 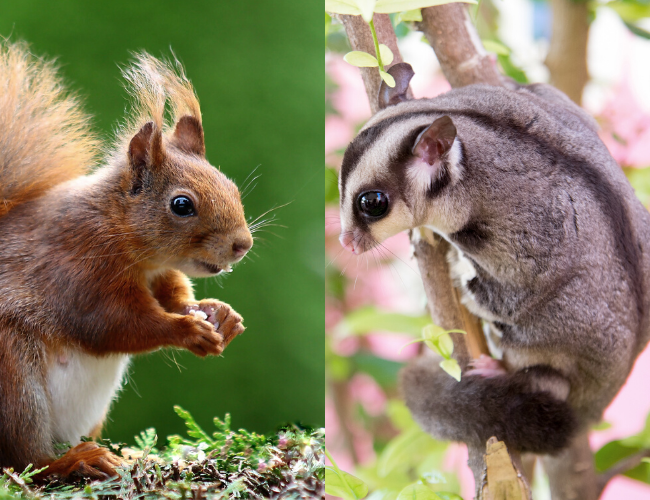 Many people often wonder the difference between a sugar glider vs flying squirrel. At first sight, one might think that there’s none as they look very similar to each other. They both have adorable doe eyes, fluffy fur, and the sizes are about the same.

They also have that extra flap of skin that allows them to glide from tree to tree. However, that’s where the similarities end. Keep reading to know the difference between these two magnificent animals.

5 Main Differences Between The Two Animals

The main difference between a sugar glider vs flying squirrel is the mammalian class they belong to. Sugar gliders are marsupial mammals, making them more related to kangaroos than flying squirrels.

Gliders are born early and live in their mother’s pouches during infancy. In contrast, flying squirrels are placental mammals where nourishment is provided through the placenta.

It’s essential to remember that there are no marsupial animals (like sugar gliders) native to northern America. The natural habitat of sugar gliders is found in Australia, New Guinea, and Indonesia.

The difference in comparing the lifespan of a sugar glider vs flying squirrel can be pretty dramatic. Depending on the species, flying squirrels can only live for about three to five years in the wild.

Although their life expectancy in captivity stretches for ten years, this doesn’t compare to the other animal. Sugar gliders can live for about 14 years, both in captivity and wild.

Another key difference that one might see between a sugar glider vs flying squirrel is in their chattering style. Exotic pet owners might notice that sugar gliders are more vocal than flying squirrels. They have a range of sounds that they make for different reasons.

Oppositely, flying squirrels are not that vocal aside from their usual chattering. These animals make short and high-pitched chirp-like sounds to communicate.

While flying squirrels can be left alone for long periods, it would be best not to do the same for sugar gliders. Exotic veterinarians recommend owning at least two gliders to avoid depression and self-harming behaviors.

Regardless of who is the better pet than who, interested owners need to understand what makes the two different. Doing this will make it easier to maintain a proper environment so they can live healthily and happily.

Aside from a couple of similarities, there are a lot of differences from what most people would assume. Consulting an expert veterinarian and researching can significantly help owners better understand the two.