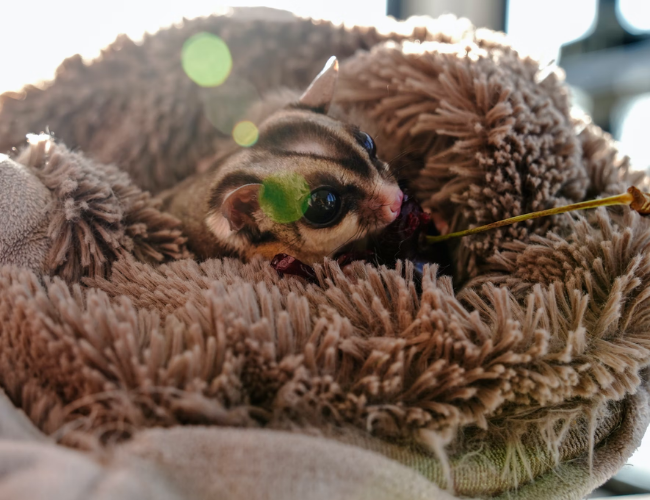 Sugar gliders are named like that because they travel long distances in the air searching for something that could satisfy their sweet tooth. These tiny animals have recently become more popular because of numerous reasons.

Aside from their cute faces and small stature, sugar gliders are exciting creatures with characteristics that people love. What could these sweet animals have that could take the world by storm? What are sugar gliders, exactly?

Sugar gliders bear some resemblance to flying squirrels. However, they are not at all related since they are not rodents.

Sugar gliders are marsupials, meaning they are more closely related to kangaroos than squirrels. They have a pouch where they raise their young.

The scientific name of the sugar glider is Petaurus breviceps, which means “short-headed rope dancer.” This name fits these animals perfectly because of their size and acrobatic tendencies when moving from one place to another.

The sugar glider is a small animal that can fit the palm of your hand. These animals can reach a maximum of 30cm from their nose to the tip of their tails. You can often find male sugar gliders slightly larger than females.

Sugar gliders have a thick, soft coat that is usually blue-gray. Nevertheless, you can find them in multiple colors ranging from white and cream to black.

In addition to their coats, they have prominent black eyes to see well in the dark. They also have a flap attached from their wrist to their ankle called the patagium. The patagium is the part of their body that gives them the ability to glide long distances.

Sugar gliders are sweet companions that enjoy social interaction. These marsupials get depressed when left alone, so it is always best to give them a partner. Their love for socialization makes them inclined to hang out with cage mates and human caretakers.

These animals are naturally playful and inquisitive. They like exploring, so you can often see them jumping from their cage to their caretaker and the couch. Once they are done playing, they love to snuggle within pouches or in shirt pockets.

If you ask, “are sugar gliders nocturnal?”, you will be surprised. Unlike most marsupials, sugar gliders are nocturnal creatures, which means you can find them resting in the mornings. During the winter, these creatures sleep while cuddled together to keep each other warm.

Sugar gliders live in the trees of tropical and temperate forests. You can find these animals in the coastal forests of southeastern Queensland and New South Wales in Australia. You can also find sugar gliders in Indonesia, Papua New Guinea, and surrounding areas.

If you are curious as to where to get sugar glider, you should not worry. You can now find these creatures sold as pets at expos, mall kiosks, and flea markets in the U.S. and other parts of the world.

The standard gray sugar glider is the most common. These sugar gliders have a gray tint with a dark stripe running from the middle of their eyes to the center of their body until it reaches the tail. You can find variations of standard gray such as the black beauty (darker colors), lion (honey or golden), and cinnamon (brownish tint).

Mosaic gliders are named as such because their fur shows a variety of patterns. Mosaic gliders have multiple variations and can come in different colors. They are subdivided based on their patterns, including the piebald (mostly white spots), ringtail, silver mosaic, white mosaic, and true platinum mosaic.

Most sugar gliders have a black bar that runs from ear to ear on their faces. The white face sugar glider does not have this bar, which gives them a purely white face. Although they have white faces, these animals have gold or gray fur.

Creamino sugar gliders are aptly named for their creamy color and a brown stripe running through their backs. Their lines can be pale or dark tan in hue. These sugar gliders also have beautiful deep ruby or garnet-colored eyes.

Platinum sugar gliders have a light silver fur. On their backs, you can find a light gray stripe that is narrower than other gliders’ stripes. These gliders have white paws that can extend up to the wrists.

White tip sugar gliders have the same color as the standard classic grays. However, a white tip’s tail has a light color. The white hairs on their end could be tiny or extend up to the middle of their tails.

Sugar gliders do not fly but instead glide from place to place. These animals use their patagium, which is a piece of flappy skin attached to their limbs. They use these skin flaps to travel long distances by controlling how the air flows around them.

Sugar gliders bark to communicate with other gliders and their caretakers. In the wild, the bark serves as a warning that there are possible threats afoot. In captivity, it might be a way to get attention, talk to other gliders, or attract mates.

During winter, sugar gliders sleep huddled together. They sleep so close to each other so that they can keep warm. Along with cuddling, they also reduce their body temperature to survive the below-freezing temperatures for a long time.

Sugar Gliders Have A Sweet Tooth

Sugar Gliders Can Travel Long Distances In The Air

Sugar gliders can increase their numbers quite quickly. A female sugar glider gives birth to one to three joeys at once. These joeys are born within 20 days and stay in their mother’s pouch for ten weeks afterward.

Sugar gliders use tree holes as their nests. They make their nests by lining them with their leaves and other materials. When they build their homes, they crawl using their feet and tails to grab onto the leaves.

Male Sugar Gliders Have A Bald Spot On Their Heads